Posted on November 2, 2016 by digipixijo

On our travels through Thailand, it struck me that there were a great many dogs on the roam. They just hang around, sitting and dozing and watching life go by,  or curl up and go to sleep wherever, and no one takes any notice of them. Other than for one cheeky four-legged chap who was sitting on the veranda of his house which was built out into one of the many water-canals, I didn’t hear any of these dogs bark at anyone, and none chased cars or bikes as some dogs are wont to do out here in Australia. Rather the Thai dogs (I can only vouch for the ones we met,) either ignore you, or quietly watch you, or come up to say a friendly, quiet “hello,” in passing. I thought they were strays, but was later told that these dogs are people’s pets, and have been raised to know nothing but care and love. As far as I could see, no one hurts them, and, in turn, they hurt no one. These pet dogs don’t even seem to fight each other. Maybe the heat is too draining for them to spend their energy in fighting.  Whatever,  I think that this is rather lovely–for an animal to feel so safe and secure–but I am not so naïve as to think that Thailand, or for that matter any place on earth, is the absolute dog heaven tale. There is always more than one side to any story, and there are always things the eye doesn’t see or doesn’t want to see.

While we were in Thailand we visited a number of Buddhist temples; some were inhabited by monks, others were not, and some never had been. In one temple precinct that did have a full quota of resident Buddhist monks,  we saw several well-fed, well-cared for dogs, and a cat. All these animals were calm and good-natured. Regardless of the milling throngs–nationals, visitors, and worshippers–at the temple, these animals calmly went about doing their own thing, sleeping, playing, walking around as if they owned the place.  I asked our guide if these animals were strays that had wandered into the temple grounds and was told “No,” not strays, but temple animals. They live in the temple precinct, and are well-cared for and well-fed by the monks who live there. 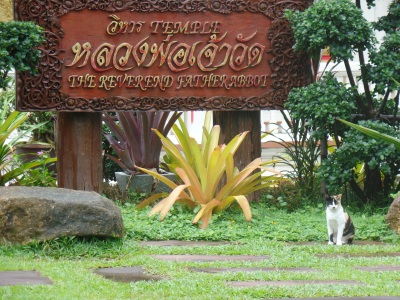 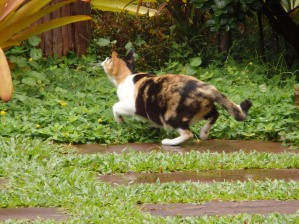 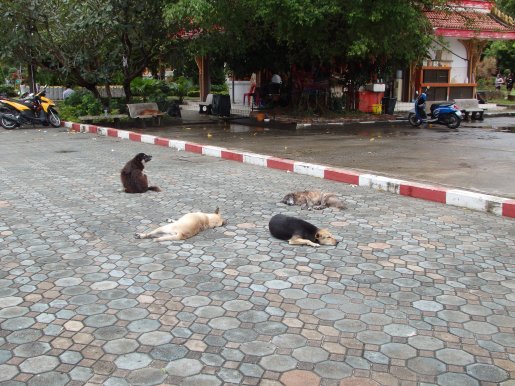 Thailand is also home to many different species of python and snake; most of the latter are deadly poisonous, but mostly these creatures keep to the forests. Even though Bob and I did walk in the forests on a few occasions, we didn’t come across any pythons or snakes, and I for one wouldn’t have stayed around to ask questions or wonder at them if we had. But we did see some pythons and snakes in captivity, and we saw many of these creatures in the various markets. 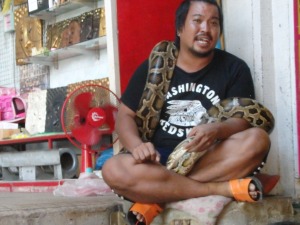 I stupidly asked one of our guides if these animals were for sale. Our guide was horrified at my question, and said in a shocked voice,  “For sale? !!! You don’t sell pets!!! No one sell their pets.” And he said a little more that sounded like, “You not get pet through Customs.” Even though the last thing I wanted to do was buy one and take it home, I got the picture. These reptiles in the markets are not for sale. They are people’s pets. The owner stands there with her or his pet, and offers passers-by the chance to pay around 250 baht (approximately $9–10 AUD) to have a photo taken with their animal. It was not for me, not even if the thing’s owner had offered to pay me hundreds or thousands in any currency whatsoever–I hate and fear snakes of any sort. But I find other animals, what I call real animals, like the tiny creature in the photos below, very very cute.

Some pets are just pets for the amusement or joy of the family, and are not put to work as such. I would have liked to have asked this monkey’s owners if they ever let the little person  off his chain, but they didn’t speak a lot of English and I can’t really speak Thai.

We also saw other endangered animals like Siamese tigers and Thai elephants in breeding and protection and rehabilitation programmes.  Neither Bob nor I can believe that we actually did what we said we’d never do–go into a tiger enclosure and play with the tiger, and on the same day, visit an elephant refuge, and ride an elephant into the jungle. For some reason, we didn’t find these experiences at all scary.  But we are agreed that after having been up close and personal to a couple of tigers on that one occasion (even laid up alongside them and held them by their tails), we will never repeat the experience for as long as we both shall live. We’ve been there and done that. N.B. Tigers have front feet that are bigger than our heads–one swipe and … voila!! 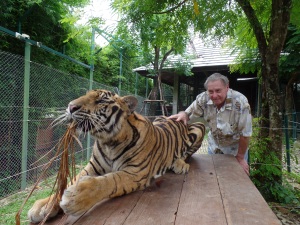 We are also agreed that we will not go riding elephants again, either. Elephants are too big, too heavy if they fall over with you, and they are too lumbering and too rough to ride. Taking a ride on an elephant is very bumpy, very uncomfortable, very bruising, and the little wooden seat structure you have to sit in, is very insecure.  Moreover, it is my belief that an elephant could send you a long way away in a hurry if it suddenly decided it didn’t want you sitting on its back.  All the elephant would have to do is reach up with its long trunk, grab you around the waist, and fling: Hasta la vista baby!

We had booked a half-hour ride on the elephant.  At the time of booking, it seemed like a fairly romantic thing to do, straight out of an old-fashioned Boy’s Own book. Despite the wonders of the forest–the beautiful and rare butterflies, the unusual tropical plants and trees, the rubber trees, and the edible exotic fruits growing wild–half an hour on that elephant was way too long. We wanted to get off and I  begged the mahout to turn his friend  around and head back to where we  could alight.  The mahout said, “One minute missy, just a little further, just a little longer,” and kept going. I didn’t like the seat, I think it is dangerous, and I also think that it’s unnatural for an elephant to have this unwieldy contraption strapped to its back. With Bob’s and my combined weights in that seat it  must have hurt the poor elephant.

Mahouts carry an elephant stick. This stick has  a long, curved steel hook that tapers into a point, and is used to control the elephant. The mahout jabs the point of his elephant stick into his elephant, to make the animal behave as he would have it do. It was explained to me that elephants are super intelligent and strong-willed creatures; that they can be very, very wilful, and are just like naughty children; that any “tame” elephant needs to be very firmly controlled by its mahout, by means of the mahout’s elephant hook; that an elephant who is not fully controlled can be very dangerous and do an enormous amount of damage, even kill whoever happens to be around at the time. I do understand. I do see the sense. Yet there is another part of my mind that can’t come to terms with this method of control. I think it rather cruel. I also see it as a form of betrayal. Elephants clearly adore their mahouts, and an elephant will only obey his or her own mahout, and the mahouts clearly love their elephants in return, yet, despite this, mahouts make good use of their elephant sticks on their poor deluded elephant charges, and often draw blood. Is this elephantine respect, do elephant’s have masochistic tendencies? Or it is something else again… 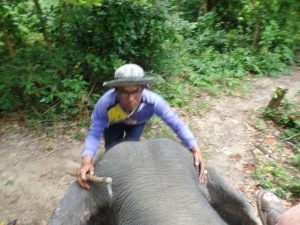 The chooks in Thailand are very pretty, colourful creatures, and look not unlike those in Vietnam. They, and their chickens,  all run around, quite free to wander, and are given right of way by humans, their owners as well as strangers.

While we were in Phuket, Bob and I, together with our friend Mr. “A”,  also paid a visit to a gibbon rehabilitation centre, the sanctuary in the forest next to the beautiful Bang Pae waterfall which is much favoured by the Thai locals as a weekend swimming and picnic spot. Gibbons have become an endangered species in Thailand. Once, there were many gibbons, but their numbers have been depleted by hunters seeking the tiny babies to sell as pets. Not only do the hunters steal the tiny gibbon babies, they also kill off the parents and whole gibbon families to do so.  Sadly, many of the gibbons kept as household pets were chained or tied up and kept in small cages, sometimes starved, and otherwise often badly mistreated. 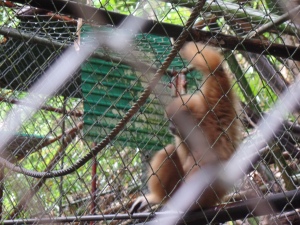 These poor gibbons in the photos above have been emotionally damaged and physically maimed by their former owners who kept them as pets. The gibbon boy in the photo on the right was chained so tightly he lost his feet, and the gibbon girl in the photo  on the left had one leg and one arm chopped off by her former owner as punishment for biting his daughter who was tormenting it at the time.

From talking to some of the New Zealand volunteers working at the centre, I learnt that these practices and instances of cruelty are, thankfully, fast becoming a thing of the past. The rehabilitation centre in Phuket,  together with other like sanctuaries and  facilities in Thailand, and together with Thai workers, foreign volunteers, and the government of Thailand, are doing an excellent job in re-educating the public to appreciate and protect their environment and the fauna.The rehabilitation centre we visited housed over 60 gibbons that were once kept as pets. Some of these gibbons are surrendered, others have been rescued, and some come in under a type of “buy-back” incentive. More come in everyday; so many in fact that sometimes the centre runs to capacity and overflows, and then these former owners are referred on to other centres. The centre in Phuket is doing the best it can, and the Thai  government gives what funding they can. For all this, though, Thailand is not a wealthy country money-wise. It is rich in other ways, such as, for instance, in its natural resources and in the people themselves, in their genuine happiness, calmness, smiling friendliness, and spiritually, and in the beauty of their country and its forests, fauna and flora.  Like most of these sorts of places all over the globe, despite all the help that it is given the centre is still plagued by a lack of monetary funds. Even so, despite the lack of sufficient funds, the sanctuary is doing its best to rehabilitate these poor gibbons, releasing any of those animals they can, those that are not too  mentally or physically or  emotionally damaged,  back into the wild.