Back in Tintagel last May, we checked out of Camelot Castle immediately after we had finished breakfast, but could not take it upon ourselves to leave the area until we had explored the ruins of King Arthur’s legendary birthplace, Tintagel Castle.

We did not wait in the village of Tintagel for the Landrover to arrive to transport us down to where the English Heritage, care-takers of the castle ruins, have their office, but set out on foot. 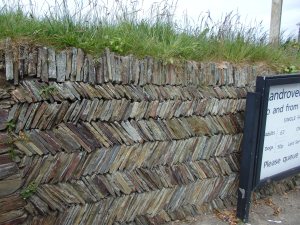 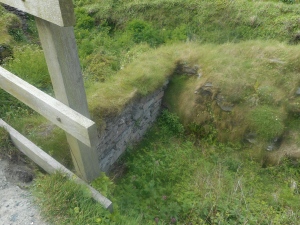 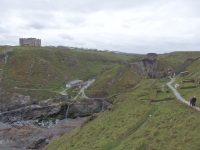 We enjoyed the long walk, stopping briefly every now and then to inspect the remains of the  slate miners’ abodes and their workings from earlier centuries. Mining for various types of minerals and ores took place at Tintagel and the surrounding areas as far back as the Romans, and the Saxons, and possibly the Celts and before. Tintagel is not used for mining now, at least, not that I know of anyway. 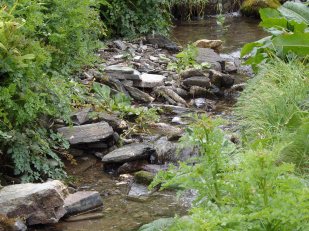 In the English Heritage Guidebook, Tintagel Castle, the author Colleen Batey says that by the 17th century, slate quarrying “dominated the lives of local inhabitants:”

the quarry at Delabole [near Tintagel,] is recorded in the Elizabethan era, and no fewer than 21 quarries were active in 1650 in the sea cliffs on either side of Tintagel. It is likely that slate was being quarried as early as the Roman period, as indicated by the presence at Tintagel of inscribed slates, including that with the Artognou inscription. The massive extraction  that took place over the centuries from the cliffs around Tintagel and Trebarwith was labour-intensive. The stone was hewn by hand, lowered by ropes, split into slates and then  transported by sea. Vessels in the Haven at Tintagel would have been loaded as quickly as possible at low tide, leaving the inlet when the waves rose. (Batey, Tintagel Castle, p. 36)

To gain admission to the ruins and Merlin’s cave one must buy tickets (very costly). The English Heritage, caretakers of Tintagel Castle ruins, have situated their ticket office in what has long been referred to as the Great Ditch (a flatter area where the old slate miners had easier access to the sea in a small inlet called the Haven), on the site of the old slate mine works’ office. This office juts out a little into the path before the start of the track that leads up the hill then down again to Merlin’s cave, and which then leads up again to the ruins. Beyond the office again, making it impossible to slip past unnoticed, is a building under construction, which, we were informed, was to be a new café and office.

Mining in the area has a long history. Chief among the minerals was copper, extracted from inside Merlin’s Cave. The major resource of Cornish tin was an early export., probably from the Roman period onwards. … The mining of silver and lead took place in the 19th century and a minor gallery was driven under the island in the 1870s. The present English heritage  café was built between 1870 and 1893, and was originally an equipment store and offices for the mine. (Batey, Tintagel Castle, p.p. 36-7) 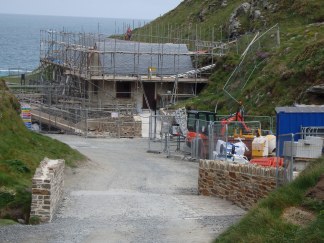 Once we had purchased our tickets, we took the cliff path and climbed down the stairs to the beach to explore Merlin’s cave. 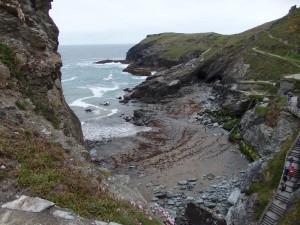 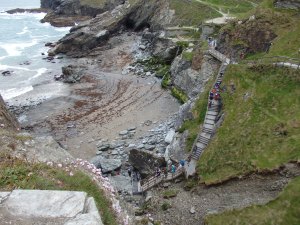 Back up the stairs, hundreds of steps, we made our way to the left, to the ruins of the ancient monastery and church, remains from the Dark Ages or before,  on the top of one high hill, and then climbed back down the hundreds of steps again to cross the foot bridge and take the stairs to the right–some of which were board, obviously built in the modern day, some of which were stone, cut into the living rock in days long gone–and make the steep climb to the castle ruins, and to the Roman ruins, and those of the dark Ages. 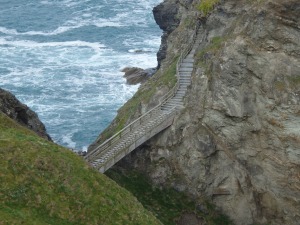 Never have I climbed so many stairs in one day in all my life. My legs were aching, my back was aching, my hands were aching from gripping the safety rail, and I was aching all over with the cold; but being a very determined person who knows exactly what she wants out of life–to experience all the good things life has to offer, and to never pass up the opportunity for an adventure–I was going to finish that climb, right to very top of all the different hills, even if it killed me and, by the time I had clawed my way up those hundreds of steep stone steps (some of which were missing a hand-rail,) and tramped up the vertical sheep trails that ran across the tops of the hills, I knew I was lucky to be alive.

Some might say that I am vertically challenged. As all full-grown people who are under a certain height will know, being short definitely has its advantages but it also definitely has its disadvantages. To get up some of those huge rock steps at Tintagel Castle ruins, some of which were very narrow and slippery, I had to literally haul myself up at times, and other times I had to search  for finger and toe holds and scale them as I would a steep rocky mountain-side, and at still other times I suffered the indignity of being hauled up by Bob, or the still greater indignity of being pushed up by Bob with his hands on my bottom, or getting a leggie-up from some unfortunate but obliging stranger who thought it was great fun, and whose face I probably stood on in the process, and all the time I was puffing and pulling myself along. But in the end I made it up those stairs even though my poor scared heart was beating almost out of my chest, and I came away with a new knowledge of King Arthur and the people who once lived in Tintagel–they were all giants. Not even a person of normal height could just walk up those rock stairs like they were taking a stroll in the park. Even Bob, and even tall strangers who passed me or waited patiently to gain a clear way past me,  had some difficulty. 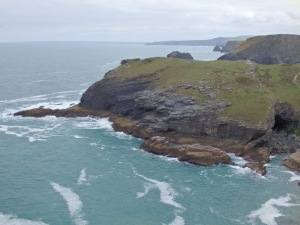 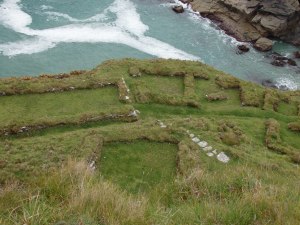 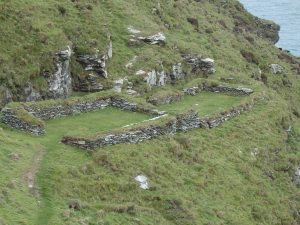 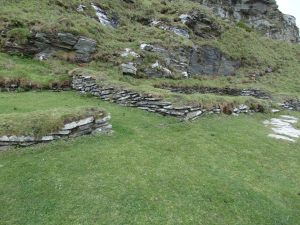 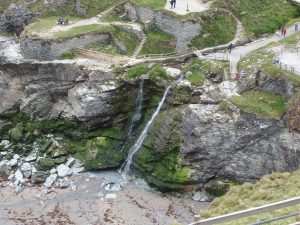 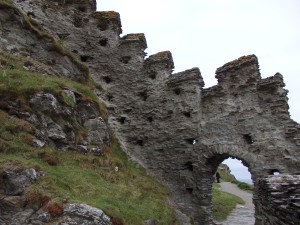 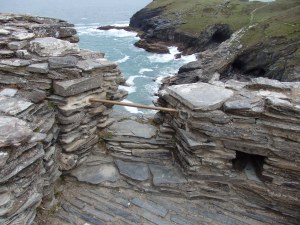 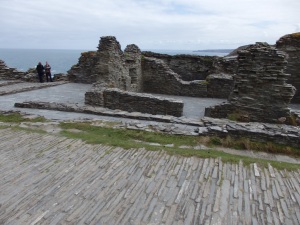 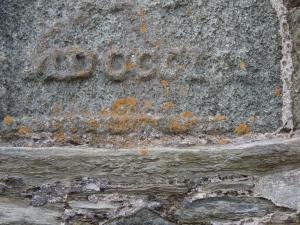 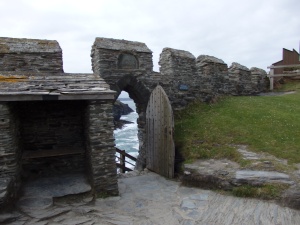 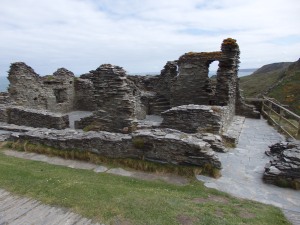 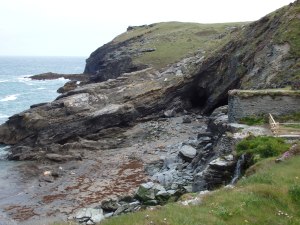 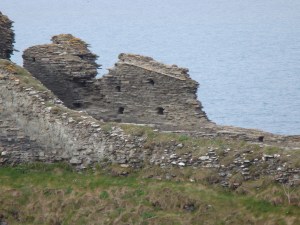 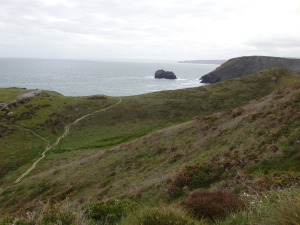 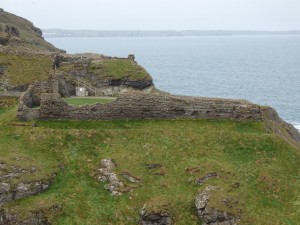 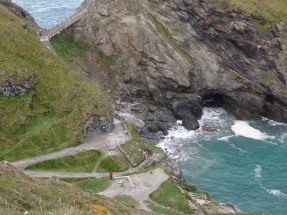 Apart from the marathon task of climbing all those hundreds of very steep steps, exploring the ruins of Tintagel was a huge thing to do in life. The feeling of connection with history, with our literary traditions, with our very roots as it were, (the site has yielded evidence that the people who once occupied this place in the various centuries traded with the Romans, the people of the Mediterranean, and the people of both the Middle and Near East,) is difficult to explain. Words, the thing writers live by, cannot fully encompass the spirituality of the place, or properly convey the magic and wonderment and enormity of Tintagel Castle ruins, a place where the land meets the sea and the sky, and of actually being there and experiencing the ancientness and the eerie atmosphere of these ruins.

Archaeological digs at Tintagel Castle ruins have turned up ‘several thousand pieces of pottery” and glass, as well as artefacts, dating from as early as the first century.  Colleen Bates reveals that another large find was made relatively recently:

During the 1990s a further extensive collection of Mediterranean pottery dating from the fifth to the seventh centuries was found at Tintagel, and came to form the largest collection in the British isles. It includes about 150 storage jars of all types: one-metre high oil jars from north Africa (Tunisia), globular jars with short, conical necks from Greece, and jars with distinctive foot spikes, enabling them to stand without support, from Asia Minor. There were also finer pieces for use at table from western Turkey (Phocaea) and Tunisia (Carthage) and glass vessels, some originating from the Bordeaux region, and others from Carthage in north Africa, Cadiz in Spain, and from the East. (Batey, Tintagel Castle, p. 27)

By the time we left the ruins and got back down to the bottom of the hill(s) I was a bit buggered, and said so.  I was not alone. Bob said he was absolutely buggered.  Some other people who had come back down with us, or reached the place a little before or behind us, said they were really buggered. So there we were, about a dozen of us, strung out in a row, leaning up against an ancient stone fence, discussing the ruins and agreeing with each other that it was far too much to get one’s head around in one visit, too much to take in, and that we’d dearly love to go back up to the ruins someday soon, just not right that very minute….

We climbed into the Landover when it arrived, glad to pay the few (?) shillings fare, and rode back in style if not comfort, to the village of Tintagel.