Chatting with the Parsons at Biddy’s Bottom 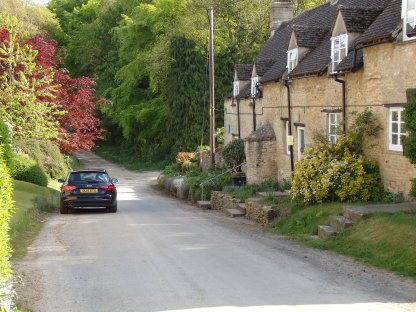 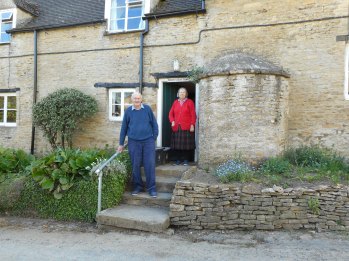 “We had a look at Old Enstone yesterday, just before we came here to see you people, and the lady at Adams’ Stores pointed out the house where Old Mont had grown up.”

David Parsons: “Oh that would’ve been M__ you spoke to. She’s lovely, a good girl is young M__.” [M__ is middle-aged.] “That’s where we do our mail. Old Mont used to, too, but he stopped going there once the book about him came out … he had all his fan mail, big sacks of it, mailed to  Charlbury, and he’d go all the way in there to collect it. He thought Charlbury were far more important than Old Enstone because it’s  a bigger place. So he used to go all the way to collect his mail from there because it made him feel important I suppose.”

The next day, while we were in Charlbury, I simply had  to post some letters from Charlbury Post Office just as Old Mont had done. But back to the Wednesday afternoon…

Mrs Parsons: This room used to be a small snug before they thought to  open it up and move the kitchen to over there where you can see it from here…”
David Parsons: “It used to be real cosy. Now it’s the coldest room I’ve ever been in. Hard to keep the heat in now it’s open plan. But they thought it were better for Old Mont, easier for him to get around. It were a bit crowded when it were a small room. He had his big kitchen table in here.”

“You were a friend of Old Mont?”

David Parsons: “I always got on well with him.  I worked with him. He taught me all I know. He were very, very good at his job, he knew what he were doing, but it had to be his way. The others on Mr Hughes’s farms  said he picked me as his work partner because I were young and he could train me up in his ways without any getting an argument. He were rigid, a bit stiff-backed and proper-like, and he always kept his accounts straight. I remember one time when he was very old, the kindly old retired game-keeper from the farms where we used to work brought him back some tobacco from town. Old Mont said: ‘What do I owe you Keeper?’ ‘No, no, it’s for you from me.’ Old Mont opened his battered tin cash box–he used to keep it just over there on his old kitchen table–and counted out money. He stacked the coins, the exact cost of the tobacco, pushed it across the table to the old game-keeper, and then entered what he’d spent on the tobacco into his ledger. You couldn’t do anything for him, he were very upright and very independent.”

In Lifting the Latch, Old Mont calls Mr Hughes “Taffy” Hughes. Old Mont, said David Parsons, created nick-names for most people, these names were apt and fitted the person concerned–“you always knew who he meant”–and he’d  use these names in ordinary conversation, and quite often to the person’s face.

David Parsons had worked as a farmer for a good part of his working life–“And I were in the Army. I were too young to go to the war, but my number came up after the war. Our unit were sent to Germany to help with the clean  up.”

I looked at Mrs Parsons: “No, I wasn’t worried about him being in Germany, but his mother would’ve been I suppose.  I didn’t know him back then, not really. Oh, I’d seen him around. He used to come into the old sweet shop where I worked,” [the one Old Mont talks about in the book] “he was sweet on me but I couldn’t stand him. Didn’t like him at all.  I was only young. Began work when I was fourteen. We’ve been married __ years now, though. We’ve got children. We’re very excited. We’re going on a trip ourselves in July, to north England for our grand-daughter’s wedding.”

David Parsons: “The grandchildren are lovely.  I’ll show you something. Who do you reckon this is in this picture? That’s right, it’s the Queen, and see that little boy there? That’s the grandson. He were chosen to present flowers to her and do you know what he said when he gave her the posy?”

Mrs Parson’s chuckled:  ” ‘Is being Queen hard work?’  He  was always thinking about what he’d do for a job when he grew up. He worried he’d get a job that was too hard for him. He’d ask everyone if their job was hard, and if he thought it was he’d scratch it off his list. Maybe he thought he could be Queen when he grew up, if the work wasn’t too hard! His sister met the Queen one time, too, and she said, ”Do you like being the Queen? Do you really want to be Queen?’ Funny little things, children.” 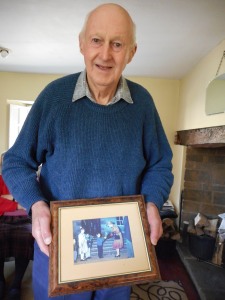 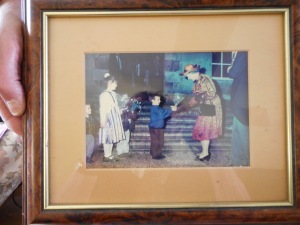 Mrs Parsons nodded towards her husband: “He was born in the house at the top of this hill, in this row of three houses. Not in the house next door with rounded piece on the front wall, the one the other side of that. Oh, the rounded piece–that’s a baker’s oven… no, it’s not used now …  a baker must have lived there once, but that was long before our time.”

David Parsons: “I went to Old Enstone school for a little while. Old Mont went there, too. But he were older than me, he were in the upper school. He were only an average sort of scholar, but that’s where the older children were, and they didn’t really play with us younger ones so I didn’t really see much of him. Then my father sent me away to be schooled …. Look, that’s me at Old Enstone school back then, third right in this photo… and that’s my father with some neighbours in this other photo.” 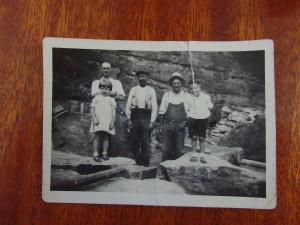 He nodded over at his wife and gave a dry laugh: “When we got married we moved into the top house, next-door-but-one to here, with my parents.  It got a bit crowded after a while. So her, the wife, and I moved to the house on top of big hill that runs across the top of street here. I had a large vegetable garden and room for my horses. So her and I started in the middle, then went right up to the top, and then when I retired it were all the way downhill from there to Biddy’s Bottom. I still go to work  where we used to live, at the house on top of big hill. I look after the garden there. See, the owner of the house had it renovated, and now he rents it out. I keep the garden going because  when people rent a house they don’t take care of the garden, and I’ve still got my horses up there as well.

From reading Lifting the Latch, I had gained the impression that Old Mont had been a wonderful gardener, one of the very best; and I had been told that David Parsons, the present owner of Biddy’s Bottom, kept the garden at Biddy’s Bottom exactly as had Old Mont.

Mrs Parsons looked proudly across at her husband. “He keeps a beautiful garden here. Flowers, lovely flowers,  out the front and here and there. Grows all our vegetables too. He really looks after them, even  puts them to bed every night, covers them up from the frost. Would you like to come out the back and see the garden?”