Not many miles from Charlbury, and a short drive from the village of Old Enstone, is the tiny hamlet of Fulwell where Old Mont once lived in his old stone cottage, Biddy’s Bottom. (Biddy’s Bottom is the last cottage in the row of attached houses in the photo below, and nearest to the camera.) 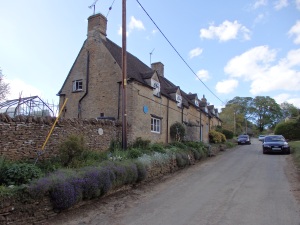 In her preface to Lifting the Latch, Stewart reveals that during the time she was writing Old Mont’s story, she would make weekly visits to his home where “he lived alone in the tiny hamlet of Fulwell where, apart from a seldom-heard passing tractor, it was so quiet, Mont seemed to be the only person left alive” (viii).

In an email, written in 2010, Edward Fenton told me that sometime after Old Mont had died, he had gone to have a look Old Mont’s cottage in Fulwell: “Fulwell remains apparently cut off from modern life. The road into it leads nowhere, so there is no traffic. It is like stepping back into the past—the real past, and not some tacky idealised reconstruction of it.” Here is an indication that in some isolated pockets of England traces of the old order still survive. 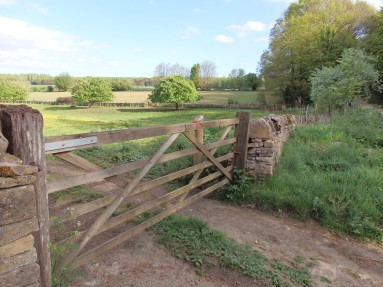 Tuesday:  We drove from London and it was after 1 p.m. by the time we met up with Edward. So after  being introduced to Sheila Stewart’s family, then stopping at the Rock of Gibraltar  before driving on to explore Old Enstone, it was late by the time we finally reached Fulwell and knocked on the door of Biddy’s Bottom. Old Mont’s cottage is now owned by Mr and Mrs David Parsons who bought it from Old Mont shortly before he died even though he remained in the cottage until his death.  Much to Mrs Parson’s disappointment we couldn’t stay for a cup of tea. Edward  had an  appointment that evening, and had to work the following day, Wednesday.  Mrs Parsons invited Bob and me to come back to Biddy’s Bottom on the Wednesday, and drink tea with them in the afternoon.

Wednesday morning:  Bob is studying history and politics. To not visit Winston Churchill was unthinkable.  Always a great family man, Churchill now lies in the church cemetery at Bladen, his tomb literally surrounded by those of other of his close relatives and various members of his wider family, and even a beloved family retainer whom I think was his childhood “Nanny.” 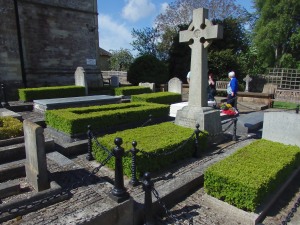 We left Bladen and drove back to Woodstock to visit Winston Churchill’s home and family seat, Blenheim Palace. The palace is indeed magnificent both outside and in, but we preferred the grounds of Blenheim to the Palace itself which, as palaces go, is a tad too ostentatious even for my liking.

Wednesday afternoon:  We returned  to Fulwell to drink tea with Mr and Mrs Parsons at Biddy’s Bottom.  By tradition, the country folk in England  bestow great honour on you when they invite you into their  homes to take a cup of tea with them.  I did indeed feel highly privileged to be sitting in Biddy’s Bottom, in  the Parsons’ front room, chatting to this pleasant, gentle, country couple. Listening to them, I entered a different world to the one I knew, and took a step back into the past. 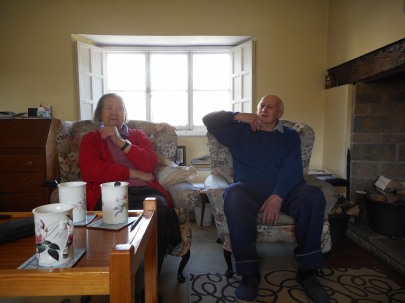 Mrs Parsons  and her husband, David, are very hospitable, very entertaining, and both have a dry but wicked sense of humour.  The Parsons had many stories to tell of their unusual life experiences and  old times, and of their acquaintance with Old Mont. I couldn’t help but think how delightful it would be to capture these lovely people talking on tape–what a book that would make!